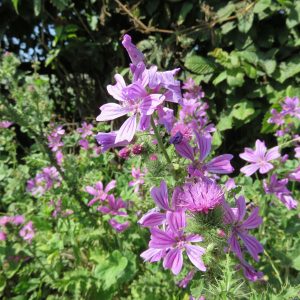 It is important to understand that there are two main situations where one can establish wild flowers. The first and most common is as a meadow, that is a mix of wild flowers growing within a grass sward. Traditionally, this would have been a field which would have had livestock grazing the grass early in the spring and later they would have been removed to allow the grass and herbs to grow for harvesting as a hay crop in summer. Once the hay had been removed, any seeds which had fallen out of the grasses and the wild flowers would be trampled into good contact with the soil when the livestock had been allowed back in to graze the aftermath before the end of autumn. The alternative is to grow wild flowers without a grass sward. In many respects this is a better proposition and avoids the potential problem of the wild flowers being swamped in the early years by excessive grass growth. Sowing wild flora within borders can work exceptionally well

1) If possible, select a weed-free site of low fertility. DO NOT APPLY FERTILISER. Broad-leaved and grass weeds together with cultivated grasses contained in standard mixtures can be highly competitive on fertile soils and may adversely affect seed germination, establishment and subsequent growth. However over-competitive may be counteracted by increased grass cutting.

2) CONTROL WEEDS BEFORE SOWING. Annual weeds may be hoed, buried or killed with a contact herbicide. Perennial weeds such as Couch-grass, Docks, Thistles and Nettles should be eradicated by a translocated GLYPHOSATE herbicide (“TUMBLE WEED”/”ROUND-UP”)

3) Sow mixtures either from early March to early May or from early August to mid-September (for autumn establishment of most species). If they contain COWSLIP, OXLIP, PRIMROSE,BLUEBELL or VIOLETS these will not be expected to germinate until after the winter following sowing.

4) Cultivate the ground to produce a fine, weed-free seed bed. Firm if necessary

6) Rake the seed in lightly with a spring-tined rake and firm the soil by treading or preferably rolling to ensure that the seed comes into contact with moisture in the soil. Water with a fine spray to avoid disturbing the surface of the soil.

7) Keep the area well watered and free from any unwanted plants.

8) During the first year after sowing the sward should be cut every 6-8 weeks(or as necessary) in order to prevent the grass from overgrowing the slower growing wild flowers. IT IS ESSENTIAL THAT THE CUTTINGS ARE REMOVED.

9) In the following years, cut in early spring (before growth starts) and in October, after all wild flower seeds have been shed. REMOVE THE CUTTINGS.

1) When choosing your site, bear in mind that the above mixtures do not contain grass seed and are intended to be sown without grass into cultivated ground to create ornamental beds of wild flowers only. THEY CANNOT BE SUCCESSFULLY OVER-SOWN INTO EXISTING GRASS.

2) When creating wild flower areas to be grown without grass, it is not necessary to avoid fertile soils. In general, wild flowers respond well to fertile ground and to being “fertilised” like any other garden flowers. However, grasses and weeds can be highly competitive on fertile soils and may adversely affect seed germination, establishment and subsequent growth.

3) Sow either from March to early May, or from early August to mid-September (for autumn establishment of most species)

5) Rake the seed in lightly with a spring-tined rake and firm the soil by treading or preferably rolling. Water with a fine spray to avoid disturbing the soil surface. Keep the area well-watered and free from grass and weeds.

6) As the seedlings/plantlets grow, some thinning-out will be necessary, especially with the larger, more vigorous species. Use the area as a source of plant material by transplanting the thinnings to other parts of the garden. Thinning out to the required planting distances should be achieved with as little root disturbance as possible.